The cake that almost got away

In my previous post, I alluded to the story of the cake that almost got away. Well, now's the time to share it. You're probably very familiar with this cake. It's hugely popular and can be spotted from a mile away. One might even call it the rock star of the cupcake world. Yes, you guessed it: I'm talking about the red velvet -- the crimson-hued buttermilk cake with hints of cocoa and a huge fan following.

For the longest time, my assistant and I loathed red velvet cake, dismissing it as nothing more than a vehicle for cream cheese frosting, a cupcake with an identity crisis (seriously, are you chocolate cake or not?), and an artificially enhanced attention whor--um, hog of a cake. A little harsh, I know, but it was all out of spite.

You see, right around this time last year, my assistant took a first stab at making this bakery favorite. Big flop. She accidentally added an extra cup of sugar, ending up with a sticky mess of bright red candy masquerading as a bundt cake. Attempt #2: She followed the recipe and instructions to a T despite her qualms about emptying an entire little bottle of red food coloring into the batter. The result? A cake that looked nice, tasted fine, and was a success!--or so she thought. That was until she was left with a bitter aftertaste that lasted for not one or two but three days! Attempt #3: A slightly different recipe, much less food coloring...same lingering bitter aftertaste. At that point, she considered herself licked and I was plenty bored with red velvet. There were more interesting cakes to be made.

It's been about a year since that trilogy of red velvet disasters, and my assistant, after tasting many a red velvet -- some good, some bad -- decided that it was time to give it another go. Opportunity presented itself during a Supper Club dinner hosted by friends Sara and Tat, for which she signed up to bring dessert. So, was it a long-awaited success or another big fat hairy flop? See for yourself! 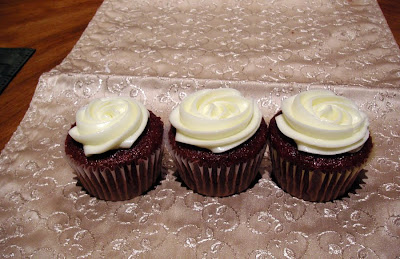 Moist buttermilk cupcakes with a tender crumb and just a hint of cocoa, a generous swirl of rich cream cheese frosting with a touch of Bailey's, enough red to be unmistakeably red velvet (sans the diabolical glow), and absolutely no bitter aftertaste thanks to a no-taste red gel in place of evil liquid coloring. 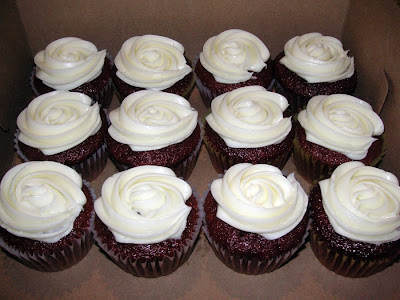 These were a hit, and boy, am I happy to say that the cake that almost got away, well, didn't. Red velvet, we no longer hate you. My assistant will be the first to admit that those were only sour grapes. I still think you're a tad overrated, but am nevertheless excited to welcome you into the repertoire of Carrie Cakeaway's offerings. Welcome, rock star. Make yourself at home.
Posted by Carrie at 9:00 AM