A cup full of sprinkles and a barrel of laughs 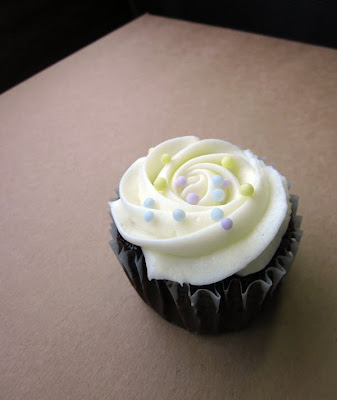 Two cupcakes are baking in the oven. One tugs at its paper wrapper and says, "Is it me or is it really hot in here?"

The other cupcake looks over, wide-eyed, and yells, "Holy crap, a talking cupcake!!"

Okay, okay -- so I wouldn't cut it in comedy, but I'm happy to leave that to my assistant who, until recently, was a proud member of sketch comedy group Kamikaze Theory. After more than a year of improv exercises, song circles, writing sessions, and plenty of love and laughter, she decided to transition from active cast member to number one fan in order to focus on me--I mean, cake. Focus on cake. Well, and me. We're a package deal, you know! 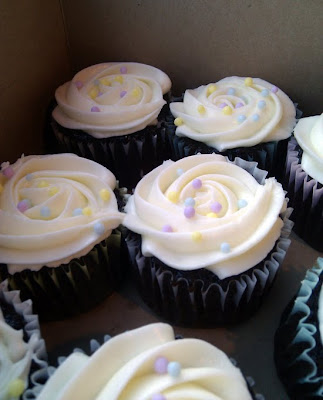 To show her love for her tremendously talented and wildly attractive castmates at their most recent show, she arrived with a post-show surprise: a box of rich chocolate cupcakes topped with luscious cream cheese frosting and festive confetti sprinkles. These were a "Congrats," "I miss you," and "You guys were fantastic!" bundled up in a sweet little package.

And as for the show? It was hilarious! What, with a charmingly inappropriate children's book illustrator, bigoted manny (that's a male nanny), and -- my obvious favorite -- a bakery in which customers are always right (even when they're oh so wrong)...what would you expect?

My assistant is a volcano and she lavas you.
Posted by Carrie at 5:47 PM

Down in LA now, and Sprinkles Cupcakes has nothing on Carrie or T!