Okay, I've caved. With cupcakeries sprouting up in cities big and small everywhere, I've been trying to turn my nose at cupcakes, deeming them nothing more than a sugar-laden, overpriced trend with an obscene frosting-to-cake ratio. After all, I'm all about the cake--moist, tender, fine-crumbed cake in all its delicious varieties from the light and spongey to the dense and fudgy. But somewhere along the way, I caved. Cupcakes are so darn cute and ridiculously fun to craft! From my first cupcake order to my biggest and most elaborate, I've been smitten and can no longer hide my excitement every time a cupcake order comes in. Like when Charles wanted a batch of boozy cupcakes for his friend's housewarming party, I was happy to oblige. 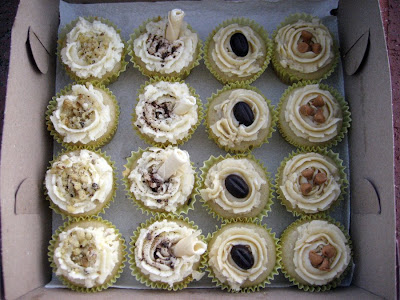 All sixteen were vanilla bourbon cupcakes made with Maker's Mark poured generously into the batter. The eight on the left were frosted with bourbon buttercream, while the eight on the right were frosted with Bailey's buttercream. Toppings from left to right were as follows: crushed walnut pieces, chocolate shavings with a coconut cream pirouette cookie, dark chocolate-covered espresso beans, and caramelly butterscotch chips.

And here's the lineup in reverse order:

If a batch of bourbonful cupcakes doesn't properly warm a house, I don't know what will ;)
Posted by Carrie at 10:55 AM

I was so sad to eat them.

Oh my goodness! I'd like to apply for the next open assistant position. ;)